Hempstead, known as the watermelon capital of Texas, was the main supplier of watermelons to the United States until the 1940s.  The city’s location, close to Houston and along Highway 290, enabled Hempstead to share watermelons with customers near and far.  That sweet spot now draws visitors from all over the Lone Star State for the most delicious festival around!

“The first Watermelon Festival was held in 1941 and was subsequently suspended due to the war.  It was revived in the 1990s by some employees of a local bank,” Israel Carberry, Director of Web Services of the Hempstead Chamber of Commerce, explained.

Patricia Williams, long-time Hempstead resident and local quilt guild member, was instrumental in the revival of the festival in 1991.  “When they originally had it [the festival], they planned for it to be an annual affair.  When the war broke out, it got cancelled for years,” she said.

She recalled that in the early 1990s, the bank employees presented their idea for the festival revival to the Hempstead Chamber of Commerce, who quickly got involved by providing both approval and support.  Williams then headed to the town library to research Hempstead’s first festival from the 1940s.  Williams uncovered the identity of the original Watermelon Festival Queen and realized that she was still living in the area.

Since its revival, the festival has continued to grow and change with the times while maintaining a sense of pride in the festival’s roots and in the community of people that organize it.  In fact, Hempstead watermelons are still a family business for some of the original participants.  The Di’Iorio family of Di’Iorio Farms & Roadside Market in Hempstead have produced watermelons for years in the area, and they usually provide many of the watermelons used in the festival every year.  Their contribution isn’t limited to outstanding produce, however, but includes years of service to their community, according to their online history.  “In 1998, Billy and Angelina Di’Iorio were honored at the Hempstead Annual Watermelon Festival for all of their years of work and dedication to the festival…Billy Dilorio that year raised the Grand Champion watermelon weighing 128 pounds, selling for $5000 and this record has never been broken!”

“The Hempstead Watermelon Festival is expected to be as exciting as always, with a parade, car show, BBQ cook-off, Jr BBQ cook-off, carnival, vendor and food booths, quilt show, live music and street dance, and of course the watermelon contest, auction, and passing of the crown to the next Queen’s Court,” Carberry said.

Not only does the festival provide visitors with a memorable experience, but it also serves an important function for the community itself.  Williams explained that her quilt guild makes a special quilt for the festival’s live auction every year. “We make the quilts for the live auction, when they auction off the watermelons, and that [the proceeds] goes to 4-H scholarships.”  Other funds raised during the live auction go to the Hempstead volunteer fire department, whose members help to sponsor and run the event.

Professional vendors come into town and set up booths along both sides of the street.  Two blocks of the city shut down completely for the celebration!  A carnival rolls into town as well.  Everything is organized to be within walking distance for visitors.  “Between our post office and the city hall is where there are all of the watermelon games…the seed-spitting contest, watermelon eating contest, all kinds of different events there on that end,” Williams said.

Worried about the heat? Hempstead usually stations volunteers along the sidewalks at designated areas to hand out free water to guests.  There is also air conditioning available in City Hall, which is open to visitors who would like to see the quilts the Hempstead guild has created.

With something to entertain everyone in the family and lots of fresh watermelons, the only thing missing from this festival is you!  Bring some family and friends over to Hempstead for the Watermelon Festival in July and get ready to eat some sweet fruit and to make even sweeter memories that will last long after the summer has passed! 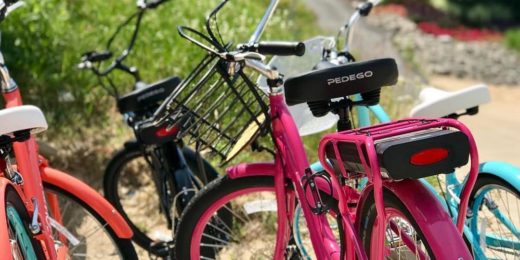 Pedego Electric Bikes gained a special place in the Snyder’s hearts, but BK started to think there could be more than just enjoying the bikes on vacations. She wanted to launch her own electric bike store. Brad and BK immediately started brainstorming the perfect place they could move and fulfill this new dream of bringing their favorite kind of fun into a community. The Stella: A Shining Star of Southern Hospitality

Anchored in the rolling meadows of Central Texas, a bright and shining star of hospitality has emerged in the Bryan/College Station area. Built in a town rich in tradition, The Stella beams as an establishment that evokes the comforting memories of true southern hospitality while simultaneously encouraging the reality of modern, progressive nature.